Jamie Oliver made me cry

If you’re in the UK, chances are that you have an opinion on Jamie Oliver. For someone who has sold that many cookbooks, and made that many TV programmes, he certainly seems to polarise opinion. To get the negative out of the way first, there is a perception that his image is utterly confected, that this wide boy persona is fake, created to tap into the “new lad” culture which was prevalent when he came to fame in the late 1990s. While it is undeniable that this had some effect on his success, two things spring to mind here. Firstly, this image is credited with the effect of “making it alright for blokes to cook.” Can’t see the harm there, young males are typically one of the demographics with the worst diet, and anything to improve the quality of what they eat has to have some knock-on effect on the health of a nation as a whole. Secondly, chances are this is a result not of Jamie himself, but of the BBC’s marketing people trying to find a new angle to present a talented chef on TV, in a marketed that was already saturated. In this case, it was hardly Jamie’s fault – he was just a young man trying to make a name for himself. 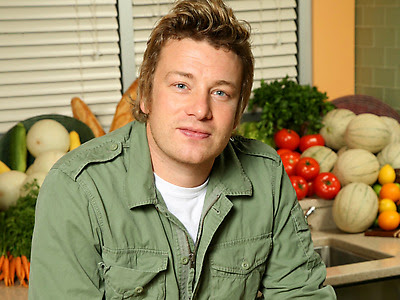 Now the result of that making that name has resulted in another criticism, namely that of over-exposure. This does carry some merit, in that what with his BBC and then Channel 4 series, his adverts for a certain supermarket, and his campaigns, there is seldom a time when he is not on our screens. Oh, hang on, what was that last bit? Campaigns. Oh yes. Here we come to an interesting point about Jamie. While many young men who come into a lot of money at a young age decide that the most appropriate course of behaviour is to spend it recklessly, get thrown out of nightclubs, and behave as if you are legally untouchable (we’re looking at you here, footballers), Jamie decided that he would use his fame and influence in quite a different fashion.

Firstly, there was the campaign to improve school dinners. While there has been some debate as to the success of this campaign (it definitely helped to improve the food at my children’s school), it has certainly raised awareness of the need to improve school food, and of the wider issue of children’s diet and their link with academic performance, attention issues, risk of disease in later life, and even life expectancy. The Kitchen Garden Project teaches children the value of growing and cooking their own food, while the Ministry of Food teaches cooking skills which seem to be on the wane with the modern trend for convenience foods. Given that reliance on such foods - with their high fat, sugar and salt content -  has been linked so closely with modern lifestyle diseases such as coronary heart disease and diabetes, it’s not exactly a leap to see how developing these skills can help to increase health and quality of life. None of these campaigns have a complicated message, and this is for me their power. Teach about food and its importance from a young age, and you will help the next generation to improve their health. It’s that simple. While it does not take a great leap of logic to realise that real food, and the ability to prepare it, is much better for health than ready-made food from a packet, it may take a “celebrity campaign” to show that it does not involve spending several years at catering college to be able to cook healthy food for your family.

This brings me onto the other aspect of Jamie’s notoriety – his recipes. He learned his trade at his father’s pub in Clavering Essex, and was discovered working at the River Café. Both establishments have a focus on simple, seasonal food, well prepared. This has dictated his culinary philosophy – his books are full of recipes which have great flavour, while being relatively simple to prepare, and using fresh ingredients. While many celebrity chefs’ books are little more than coffee table items, filled with recipes so complicated they require NASA-like levels of preparation, Jamie’s recipes have the same qualities as those of Delia Smith – simple to prepare, always very tasty, and incredibly reliable. His latest, 15 Minute Meals, is not only filled with recipes which hit all the above criteria, but also have a focus on health, as full nutritional breakdowns are covered, and the emphasis is on maximum flavour with the least amount of fat/salt/sugar/other bad stuff. It is easily the best cookbook I’ve bought in years (I’ve bought 3 copies for other people, and my copy is covered in stains from use), although I do have one criticism – if the meal takes 15 minutes to prepare, the washing generally takes longer than that, as you do end up using most of your kitchen to make it. 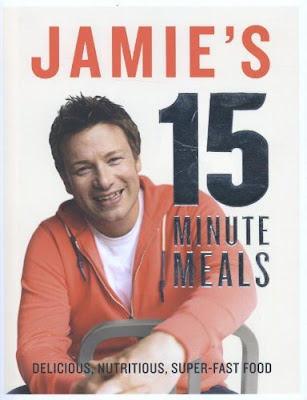 To finish off what seems to have turned into a love letter to Jamie (I’m not apologising for that), the video below is included as an attempt to convince the doubters that he is just a product of cynical marketing. This video made me cry, with its sincerity of message, and its importance. I hope you find it inspiring, even if it is just to make your dinner tonight with fresh ingredients, rather than get it out of a packet. If not, then I hope it suggests to you that Jamie Oliver is a Good Thing when it comes to this country's eating habits.

Posted by Chris Chapman Nutrition at 03:35