Everyone loves a curry...

This recipe of mine has appeared on my friend Liz’s Fit & Fun at Home Facebook page, so I thought I’d share it here too. As well as requiring no specialist skill or equipment, nor a vast list of ingredients which it takes hours to buy, this curry is very tasty, and packed full of beneficial ingredients:
·         I’ve previously mentioned the benefits of eating oily fish such as the salmon here, which could just as well be replaced by trout;
·         The cauliflower and spinach both contains high levels of compounds called glucosinolates, which may have a protective effect against certain forms of cancer. Studies have shown that they can block the initiation of tumours.1
·         Quercetin found in the onion is a powerful antioxidant, and studies have linked high intake of it with reduced risk of heart disease; 2
·         Sweet potatoes are a great source of vitamins A and C, and are a source of low GI carbohydrate, which will not give your blood an insulin spike, keeping energy levels more constant. 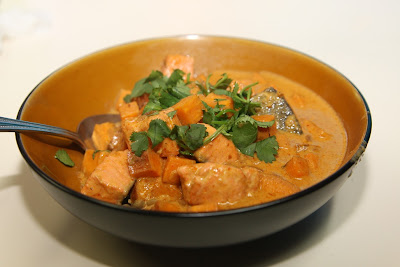 Method:
Cook the onion in the oil until soft but not too coloured. Add the paste and sweet potato. Stir and add the coconut milk. Bring to the boil, put on a lid, and leave to simmer for 10 minutes. Add the cauliflower, and simmer with lid off for another 10 minutes. Throw in the salmon, then the spinach, cover and cook for about 8 minutes, until the fish is cooked and the spinach is wilted. Serve sprinkled with coriander leaves if you have them.
Eat with naan bread to mop up the sauce, unless you're on a gluten-free diet, in which case just tip the bowl up and slurp up the sauce!

Nutrition:
A bowl of this will give you the following nutrients:
Energy: 616 kCalories
Protein: 33g
Carbohydrates: 39g
Fat: 33g

To change things up, this would work equally well by substituting any white fish or prawns for the salmon, or broccoli for the cauliflower. A garnish of chopped fresh chilli would give a metabolism-raising hit of flavour.

Posted by Chris Chapman Nutrition at 05:56